On June 22, the China liquefied petroleum gas (LPG) comprehensive import CIF index released by the Global Trade Monitoring and Analysis Center of the General Administration of Customs and the Shanghai Petroleum and Natural Gas Trading Center showed that from June 13 to 19, China’s liquefied propane was comprehensively imported to The CIF price index was 149.35 points, down 0.67% month-on-month and up 43.40% year-on-year; China's comprehensive import CIF price index for liquefied butane was 149.57 points, up 1.18% month-on-month and 47.13% year-on-year. 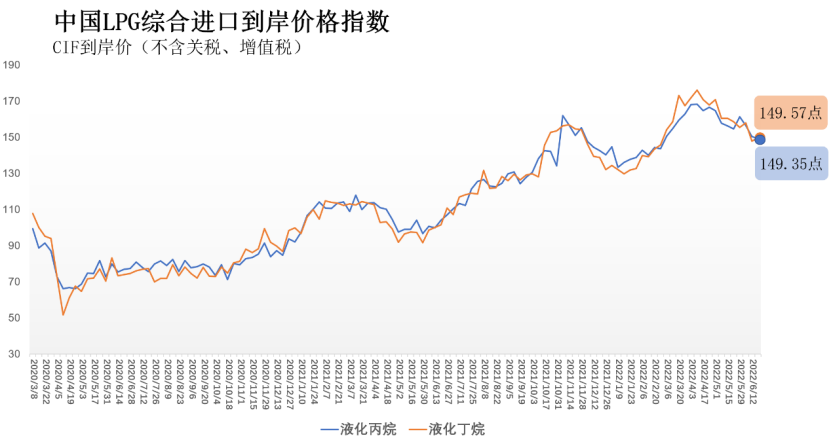 In terms of international prices, the international price of LPG has a high positive correlation with the price of crude oil.From the perspective of crude oil prices, the central banks of many countries around the world have demonstrated their determination to deal with high inflation. The Federal Reserve and the Swiss National Bank took the lead in stating that they may implement a larger interest rate hike plan. The single largest interest rate hike will still be followed by a high probability of substantial interest rate hikes to curb inflation, and the risk of U.S. economic recession may continue to intensify; international oil prices have fallen sharply, and U.S. oil prices have fallen even more strongly.As of the close of last Friday (June 17), the main contracts of WTI and Brent crude oil futures were reported at US$109.56/barrel and US$113.12/barrel, respectively, down 9.21% and 7.29% from the previous week.The recent drop in international oil prices is obvious, which may hinder the further strengthening of international and domestic LPG prices to a certain extent.Due to the trade pricing cycle, my country's LPG import CIF price often lags behind the international market futures price and spot price for a period of time.

The compilation of China's LPG comprehensive import CIF index is completed by the Global Trade Monitoring and Analysis Center of the General Administration of Customs and the Shanghai Petroleum and Natural Gas Exchange Center. / ton, the price index is 100; the comprehensive import CIF price of China’s liquefied butane this week is 3535 yuan / ton, and the price index is 100) which comprehensively reflects the CIF price level of my country’s LPG imports last week.This is a beneficial exploration of my country's preparation of its own LPG benchmark price, which is conducive to improving market transparency, providing an important reference for the marketization of LPG chemical industry, and is conducive to the timely and effective connection between the domestic market and the international market, and further enhances my country's presence in the international LPG market. influence.