Guo Kai, member of the Standing Committee of the Licheng District Committee of Jinan City and deputy head of the district, said in his speech that as the central urban area of ​​the provincial capital, the high-quality development of Licheng District is ushering in a once-in-a-lifetime major opportunity. The city actively responds to the requirements of the Jinan Municipal Party Committee and Municipal Government, fully implements the strategies of "Science and Innovation Jinan" and "Digital Economy Leading", relies on the National Supercomputing Jinan Center, and focuses on the industrial function layout of "two centers, four districts and five parks", in Qilu Science and Technology Grand Corridor In the core area of ​​14.2 square kilometers, build a whole industry chain structure of "upstream computing power support, midstream data research, and downstream industry applications", and strive to create a "supercomputing digital industry ecological innovation circle" with an industrial scale of 100 billion, which will serve as the foundation for Jinan's digital economy. The industry has reached a trillion-level scale to provide a powerful engine. As the core area of ​​the Qilu Science and Technology Innovation Corridor, the "Supercomputing Digital Economy Ecological Innovation Circle" carries the core industries of Jinan's digital economy. The superposition of policies and services, as well as supporting high standards of ecology, life and education, will promote the development of digital industries in Jinan. It gathers and promotes the gathering of talents and intelligence here. Ultimately, it will become a model for the "integration of production, life and ecology" and "integration of production and city". 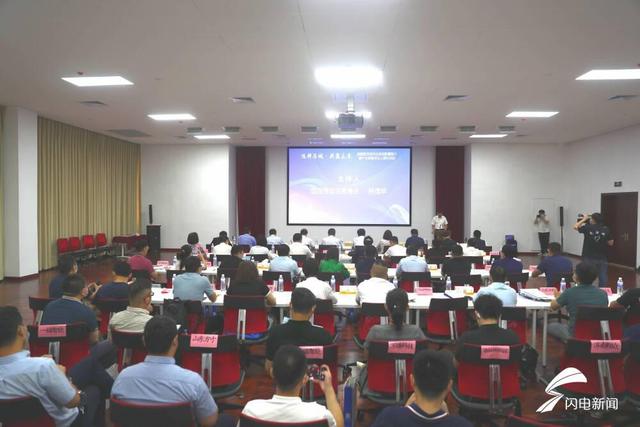 Yang Kejian, deputy head of Licheng District, interpreted the "Several Measures of Licheng District on Promoting the High-quality Development of the Digital Economy". The "Several Measures" are based on the existing foundation and advantageous conditions of our district, and on the basis of extensively soliciting expert opinions and suggestions, from four aspects: promoting the development of industrial agglomeration, accelerating the development of the sensor industry, supporting integrated development, and supporting cooperation and exchanges, aiming at the digital industry in our district. Focusing on the frontiers of digital technologies such as smart sensors, blockchain, and virtual reality and the needs of international and domestic markets, it takes artificial intelligence, big data, industrial Internet and other new-generation digital technology innovation applications as the main engine, and uses digital product manufacturing, The cultivation and growth of cutting-edge emerging digital industrialization such as software and information technology services shall be the main driving force, and fifteen measures to promote the high-quality development of the digital economy shall be formulated. Guided by policies, the digital economy will be highly innovative, permeable, and widely covered, release the multiplier effect on economic and social development, promote the transformation of development patterns and growth momentum, and accelerate comprehensive revitalization to achieve new breakthroughs in all-round revitalization.

The Supercomputing Digital Economy Innovation Circle Service Center promoted the "Supercomputing Digital Economy Ecological Innovation Circle". The innovation circle is located in the Caishi area of ​​Licheng District in the southeast of Jinan City, with Yuling Road and Jinan International Racecourse in the west, Yuhuang Mountain in the north, Cailong Road and Chunhui Road in the east, and the north side of Panlong Mountain in the south, with a planned area of ​​14.2 square meters. It is the core area of ​​Qilu Science and Technology Corridor, and is also defined as an important node of Jinan's "Dongqiang" development corridor.

In the next step, the innovation circle will adhere to the guidance of planning and the integration of industries and cities, promote the joint development of the digital economy and industry, and focus on the functional positioning of digital industrialization, industrial digitization, and data value, and accelerate the construction of the "two centers, four districts and five parks" industrial function circle. Create a new highland for the innovation and development of the digital economy and a gathering place for high-end digital economy industries.