In early trading on June 22, the auto sector soared collectively. As of press time, 17 stocks, including CIMC Vehicles, Ankai Bus, and Yutong Bus, rose by the daily limit, and over 30 stocks rose by more than 5%. 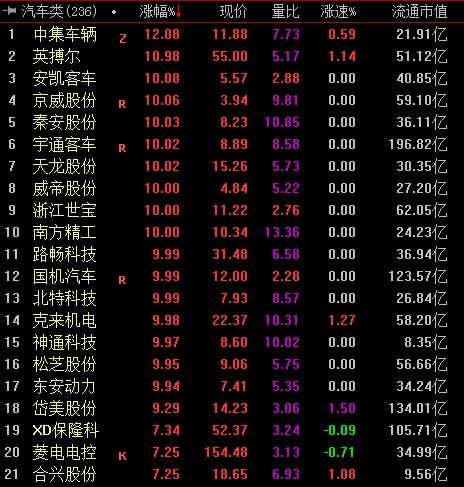 In terms of news, on June 20, the "Medium and Long-Term Plan for the Development of the Hydrogen Energy Industry in Shanghai (2022-2035)" was released, which mentioned that by 2025, about 70 hydrogen refueling stations of various types will be built, and 5 to 10 furniture will be cultivated. Unicorn enterprises with international influence have built 3 to 5 world-class innovative R&D platforms, the number of fuel cell vehicles has exceeded 10,000, and the industrial scale of the hydrogen energy industry chain has exceeded 100 billion yuan, driving carbon dioxide emission reduction in the transportation field 50,000 tons/year to 100,000 tons/year. By 2035, the development of Shanghai's hydrogen energy industry will generally reach the international leading level, and the R&D and innovation center, key core equipment and parts manufacturing and testing center will be built to lead the development of the national hydrogen energy industry.

In addition, Apple has begun to deploy business related to automotive research and development in China, which seems to indicate that Apple is preparing to enter the automotive industry as a supplier. According to information on Apple's official website, Apple is currently recruiting automotive experience partner engineers in Beijing, Shanghai and Shenzhen. According to the job description, the role entails providing integration support for automotive partners and assisting developers with Apple's system certification.

CITIC Construction Investment pointed out that the current upward momentum of the auto sector market has changed from the previous expected restoration to the upward elasticity of the economy, and it is recommended to actively increase the allocation. We are optimistic about the recovery of the automobile market under the continuous improvement of sales in the second half of the year. It is recommended to pay attention to two main lines: 1. The whole vehicle is optimistic about the low inventory + stable growth policy to promote the upward elasticity of sales and profits; There are three main lines: end-to-end marginal improvement), demand elasticity (promoted by stable growth policies) and growth trend (electric intelligence).

Huaxi Securities believes that with the further formation of domestic motorcycle culture, the release of demand for upgrading and replacement of emerging consumer groups, and the marginal improvement of the motorcycle ban and restriction policy, it is expected that the industry will grow by about 40% in 2022, and the annual sales volume will reach 400,000+ vehicles, of which the lower For half a year, it is recommended to focus on the impact of exchange rates and the two rounds of export increments.